I love listening to music. My current lifestyle means that I mostly listen to music either on-the-move (using some PMP running Rockbox) or at my desk whilst working. I don't currently subscribe to any streaming music services because BBC 6 Music is simply too good. 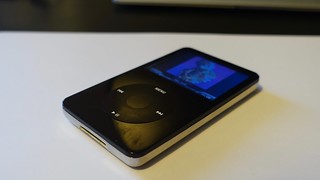 On the move, I use an iPod Video with an iFlash adaptor, running the Rockbox open source firmware, with a pair of Bose on-ear wireless fold-able headphones.

On the rare occasions I get to listen to music at home, I use a Dual CS 505 turntable (~1980, a gift from my Father) with an Autofon stylus and a Cambridge Audio AM10 amplifier (recently replacing my stalwart Rotel RA-712 from 1976) and a pair of Eltax monitor IIIs. The system is housed in a slightly customized Ikea Expedit shelving system.

In the dim and distant past I was a big minidisc fan. I only recently parted with my Sony MZ-R70 minidisc player. I still have a Sony cassette walkman somewhere.

The first pair of vaguely decent non-earbud phones was a pair of AKG K512s which were good, but the Sennheisers really put how good into perspective. On-the-move, I really loved a pair of AKG K451 fold-able on-ear headphones.

For a long time I used a succession of Sandisk Sansa-branded PMPs, from the Sansa Fuze (v1 or v2), Sansa Clip Zip and a Sansa Clip+ (gift from my previous coworkers, thanks!). These were great players, but like all things they eventually wear out, and new ones became too costly to buy, so I moved to a hacked iPod.

There are a lot of cure bootlegs, and a lot of interesting cure stuff to collect on them. Stiff as toys and tall as men has a very comprehensive bootleg database.

There's a version of the Cure's All Cats are Grey floating around on bootlegs that has a string (probably violin) introduction. Here it is on youtube:

I've never found the full song (just the string intro) and never in a good quality. Does anyone know the story behind it? Is it an early demo? Who is playing the violin? Or is it a live recording?

My old guide to some free music available online.

Now sadly defunct, The Blue Monday Owner's Club was an art project by a New Order / Blue Monday fan. The basic idea of the site was for people who owned the record (reportedly the best-selling 12" single of all time) to submit a picture (straight or artistically-stylised) of themselves with their record. The website showcased each picture. I think there were also biographies attached ("where where you when…-style).

I believe the plan was to publish a book of the photographs, but it doesn't seem to have come to pass.